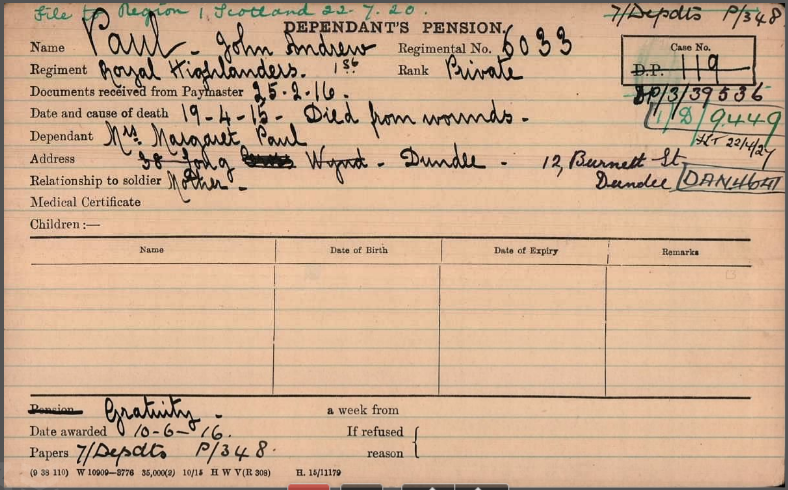 The sad news is contained in a letter from the matron of the hospital, in which she says :___I am so grieved to have to tell you that your son was admitted into hospital last night and died before morning.  The poor fellow was shot in the abdomen.  He was conscious for a short time, and we got your address from him.  He passed away quite peacefully about 4 a.m.  It is so dreadful to have to write these sad tidings.  Sometimes we think the ones who get speedy release are the fortunate ones—some of them have to suffer so horribly.  We feel so much for all at home who are giving their dear ones so nobly to their King and country.  We do our poor best for them when they come in sick and dying.”

Private Paul, who was in his 20th year, joined the Royal Field Artillery when he was eighteen years of age, but afterwards transferred to the 1st Black Watch.  He was his mother’s sole support.  One brother, Alexander, is in the Highland Light Infantry, while another, Thomas, is in the Navy.

Can you tell us more about John Andrew Paul? Some additional facts, a small story handed down through the family or perhaps a picture or an heirloom you can share online. Contact our curator...