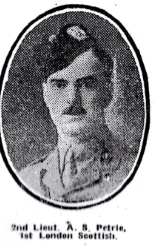 Allan Strachan Petrie was born on 25 April 1891, the son of Andrew and Annie Petrie. In May 1907 he went to work for National Bank of Scotland as an apprentice at its Dundee Hilltown branch. In February 1910 he moved to the bank’s main Dundee branch, and in 1914 to London office.

During the First World War Petrie left the bank to go on military service, and by 1916 he was a Second Lieutenant in the London Regiment, on active service in France. He was killed in action there on 10 September 1916. He was 25 years old.

Official intimation has been received of the death in action of Second-Lieut. Allan S. Petrie, younger son of Mr Andrew Petrie, 15 Bonnybank Road, Dundee, and brother of Mr Andrew Petrie, jute merchant.  Lieut. Petrie, who was 25 years of age, served his apprenticeship in the National Bank of Scotland, Dundee, and was afterwards transferred to the London head office of that bank.  He joined the London Regiment on the outbreak of war, and saw much active service with his battalion.

He was wounded at Loos on 25th Sept, 1915, and on recovery was given a commission to his former company as a lieutenant in the spring of this year.  Lieut. Petrie had passed through a lot of severe fighting of recent months unscathed, but while leading his men in the open on the early morning of 10th Sept. a party of Germans was encountered, and during the fighting which followed he was hit by a bullet, which caused almost instantaneous death.

Lieut. Petrie was greatly esteemed by his comrades, and one of them writing home says that “he was a keen and conscientious soldier.”

Can you tell us more about Allan Strachan Petrie'? Some additional facts, a small story handed down through the family or perhaps a picture or an heirloom you can share online. Contact our curator...