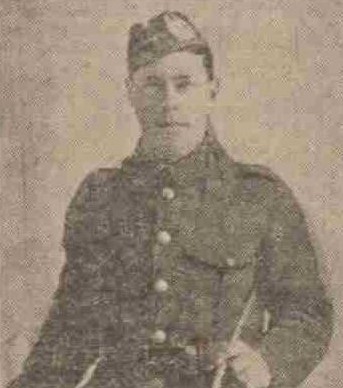 George’s real name would appear to be George Petrie Russell, but for reasons unknown he served as George Petrie.

ONE OF FOUR LOCHEE BROTHERS

IN FORCES IS KILLED IN FRANCE.

“His death is a distinct loss to the regiment, as, had he been spared, in all probability he would have became a non-commissioned officer very shortly.”

This glowing tribute is paid by his officer to Private George Petrie Russell, whose mother. Resides at 10 Flight’s Lane Lochee, has just received notification that he was killed on 14th inst.

Under date of 15th inst. the officer writes :–“I t is with the very greatest regret that I have to write to inform you that your son George, of my company, was killed last night in the trenches by a bullet, death being instantaneous, as he was shot through the head.”

Private Russell was only 19 years of age, and previous to his enlistment shortly after the war broke out, he was employed in Messrs Cox Bros. Works, Lochee.

Mrs Russell has three other sons and a son-in-law in the forces, while her husband was a captain in the Public Works Department of the army in India, where he died.

Corporal James Russell, who is 39 years of age, and has been in the army for 21 years, is in the Royal Engineers.  William (37) is a seaman on H.M.S. Neptune, while Alexander is a sergeant in the Royal Engineers.  The son-in-law, Alexander Bowman, is a gunner in the R.F.A.  He was employed in Calcutta, and after the outbreak of war joined the forces I British East Africa.

Can you tell us more about George Petrie? Some additional facts, a small story handed down through the family or perhaps a picture or an heirloom you can share online. Contact our curator...