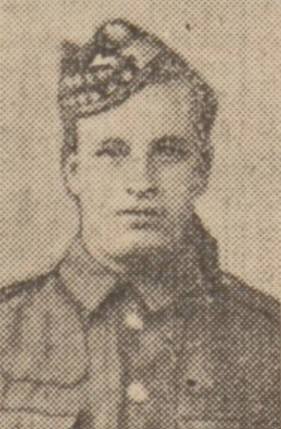 17047 Pte. Henry Hutchison Petrie, 6/7th Royal Scots Fusiliers, was killed in action on 12 August 1916. He was the son of Mary Petrie Mitchell, 8 Ferry Road, and had been employed at Clepington Works for some fourteen years.
Petrie was a prominent player with Dundee North End.DUNDEE FOOTBALLER KILLED. Mrs Mitchell, 8 Ferry Road, Dundee, has received intimation that her son, Pte. Henry Petrie, Royal Scots Fusiliers, was killed in action. Thirty years of age, Pte. Petrie had been at the front for fifteen months, and had just returned to the trenches after a brief rest to recover from shell shock when he met his death. Previous to enlistment he was employed by William Cleghorn, Ltd., Clepington Works, Arklay Street, Dundee, an had been with that firm for fourteen years.
Pte Petrie was a prominent member of the Dundee North End Junior Football Club. Mrs Mitchell has two sons still serving with the colours – one in the R.G.A. and one in the Royal Scots Fusiliers. She has also a son-in-law with the R.G.A. and a brother in the Black Watch. The Courier, Thursday, 7 September 1916, 4

Can you tell us more about Henry Hutchison Petrie'? Some additional facts, a small story handed down through the family or perhaps a picture or an heirloom you can share online. Contact our curator...