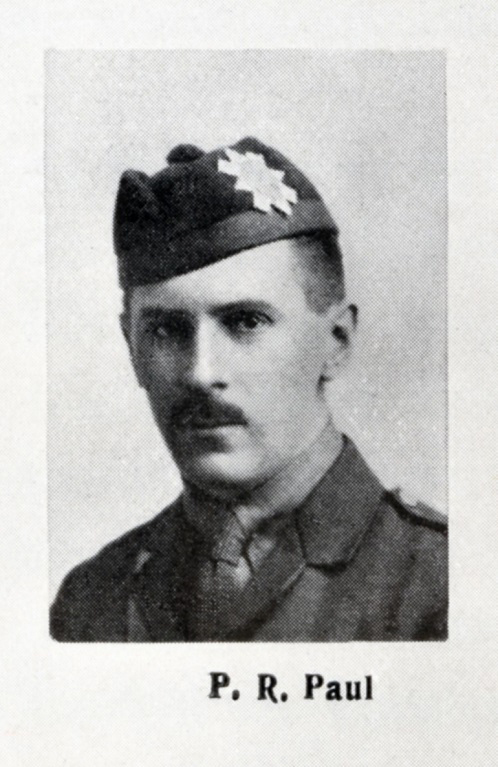 Lieutenant attended school at Morgan Academy and later studied at Dundee School of Art, where he was described as one of their most brilliant students, graduating in 1906 with an Art Teacher’s Certificate. He went on to work at Belfast School of Art before gaining a scholarship to the Royal College of Art in London. After gaining a diploma in Design (specialising in stained glass) he commenced on Painting when the war intervened,

He enlisted in the army and served as a trooper in the Royal Horse Guards before gaining a commission as Lieutenant in the 8th Black Watch, acting as instructor and assistant adjutant. He was killed in action at Ypres on 1 Octoboer 1918, aged 31. He is remembered at the Tyne Cot Memorial, Belgium (but listed as Philp not Philip)

Lieutenant Philip R. Paul, Black Watch who was killed in action on the 1st October, was the youngest son of Mr. and Mrs. A. Paul, 2 Wortley Place, Dundee.  Lieutenant Paul who was an art teacher by profession, was 31 years of age.

Lieutenant Philip R. Paul, Black Watch, youngest son of Mr. and Mrs. A. Paul, 2 Wortley Place, Dundee, whose death in action was reported in our columns yesterday was well known and highly respected in art circles in Dundee.  He obtained his early art training in the Dundee Technical College, and later went to Belfast School of Art as an assistant.  After two years’ experience there he obtained a scholarship at the College of Art London, where he specialised in design and obtained the College diploma.  His special work was stained glass and he promised to have a most brilliant future as a craftsman in this material.  Deceased joined the army almost immediately after the outbreak of war, at which time he was studying for the College diploma in London in painting.  After receiving his training in the Life Guards (Blue) he obtained a commission in the Black Watch and proved most invaluable as an instructor, and was assistant adjutant of his battalion.  Lieutenant Paul was one of the most brilliant students that have been at the Dundee School of Art, and acted as assistant at the Technical College.

Can you tell us more about Philp Reid Paul'? Some additional facts, a small story handed down through the family or perhaps a picture or an heirloom you can share online. Contact our curator...