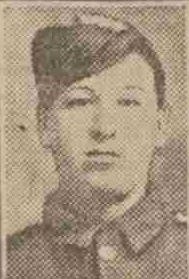 Alexander has no known grave but is remembered on the Arras Memorial.

Pte. Alex Philips, Black Watch, second eldest son of Private George Philips, Royal Defence Corps, and of Mrs Philips, 20 Parker Street, Dundee, has been killed in action.  Private Philips was 20 years of age, and enlisted in November, 1914, when he was only 16 years of age.  He had been at the front for ten months.  Prior to joining the forces deceased was employed as a yarn dresser with Gilroy, Sons, & Company, Ltd., Tay Works.  An officer, writing to his mother, states :- “Your son fell fighting a great fight, and I trust his heroic death may console you in some little way for your great loss.”

Can you tell us more about Alexander Philip? Some additional facts, a small story handed down through the family or perhaps a picture or an heirloom you can share online. Contact our curator...