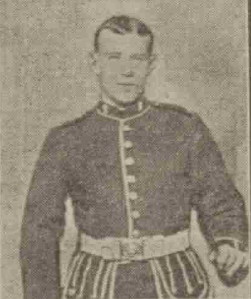 David is believed to be the brother of Pte Alexander Player, 2435, Lord Strathcona’s Horse, Canadian Cavalry.

ONLY MARRIED IN MAY.

Mrs Player, who resides at 5 Pitfour Street, Dundee, has received a letter from a chaplain intimating that her husband, Private David Player, 9th Black Watch, was killed in action on 25th September.  The chaplain adds that he saw him buried on the battlefield.

Private Player was wounded at La Bassee, and when home for a short time in May he was married.  The date of his marriage was 3rd May, and he proceeded to the front again on the following day.  Private Player, who was 24 years of age, was a member of the 2nd Battalion, and went to France from India, where he was stationed for two years.  On his return to France in May he was drafted into the 9th Battalion.  Before enlisting Private Player was an employee of Mr James Aimer, Cowgate, Dundee.

Can you tell us more about David Forbes Player'? Some additional facts, a small story handed down through the family or perhaps a picture or an heirloom you can share online. Contact our curator...