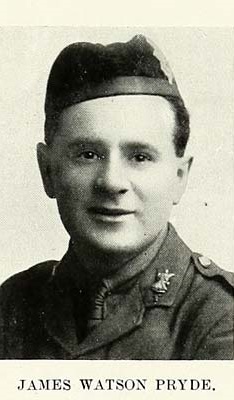 James was in charge of “B” Company 3rd/1st The Kings African Rifles Nyasaland. He was killed in action at Nakati, Portuguese  East Africa.

Captain James Watson Pryde, Black Watch, attached King’s African Rifles, who is official reported to have been killed in action on 5th May, was the only son of the late Mr David S. Pryde, house proprietor, and of Mrs Pryde, 28 North George Street.  The deceased officer who was 27 years of age, had a brilliant university career.  After receiving his primary education at the Morgan Academy he went to St Andrews University, where he graduated M.A. five years ago, and he had only a year to complete of his B.Sc. degree course when war broke out.  He was sergeant-major in the University O.T.C., and realising the country’s need for men he joined the colours shortly after the was declared, and received a commission in the Black Watch.

Can you tell us more about James Watson Pryde'? Some additional facts, a small story handed down through the family or perhaps a picture or an heirloom you can share online. Contact our curator...