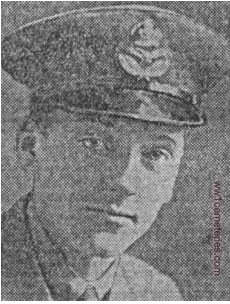 John was an observer when he was killed flying a DH4 A8051.

Lieutenant Pullar enlisted in the R.A.F., a year ago, and had been at the front for five months.  He was nineteen years of age, and before joining the Air Force was employed with Ralli Brothers, jute merchants, Royal Exchange Buildings.  Deceased, who was fatally wounded on his 19th birthday was returning from a reconnaissance, when a hostile machine was encountered and disposed of.  Soon afterwards another attack was made by eight enemy ‘planes, one of which was shot down by Lieutenant Pullar.  Another of the German machines, however, managed to get to close quarters, and a shot from it seriously wounded him.

Can you tell us more about John Pullar'? Some additional facts, a small story handed down through the family or perhaps a picture or an heirloom you can share online. Contact our curator...