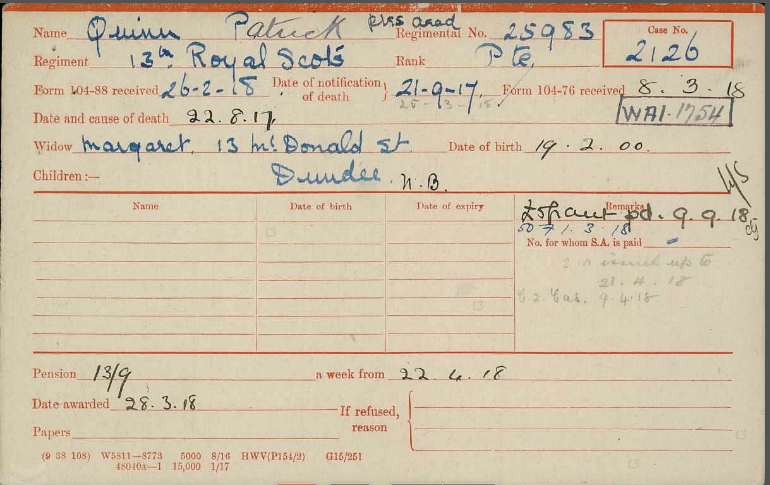 Patrick has no known grave but is remembered on the Tyne Cot Memorial.

25983 Pte Patrick Quinn Royal Scots
Patrick was a Dundee lad who enlisted in July 1915 at the age of 19 years. At the time of his enlistment he was living and working as a coal miner in Lochgelly, Fife where his address is given as 10 Hunter Street  Promoted to the rank of Lance Serjeant. He arrives in France on 4th March at 35 Infantry Base Depot in Etaples and joins 17th Bn in the Field on 24 March 1916 being with the Bn through some of their most active fighting on the Somme. On 12 Sep 1916 he develops a fever and is admitted initially to 106 Fd Ambulance and then quickly moved to 37 CCS on 13th and then straight on to No 6 Stationary Hospital in Frevent where he is diagnosed suffering from Trench Fever. His recovery is somewhat protracted as he is further evacuated to 11 Stat Hospital in Rouen for evacuation to UK on board HMHS Lanfranc on 29 Sept 1916.
HMHS Lanfranc was an Ocean Liner pressed into service as a Hospital Ship and she was later torpedoed by a U Boat in the channel returning to UK from Calais with wounded on board.  I have included a picture of her as RMS Lanfranc.  Coincidentally HMHS Lanfranc was built and launched by Caledon Shipyard Dundee.
He is further treated at No 1 Scottish General Hospital in Aberdeen before being discharged back to the Depot Bn R Scots, 3rd Reserve Bn. He continues his convalescence and remains with 3rd Res Bn R Scots at the Regimental Depot until next fit for deployment overseas
Here his story takes a couple of disciplinary twists intertwined with changes in his own personal circumstances. Despite having achieved promotions he had reverted through the ranks back to the Rank of Private soldier, (Pte), and he served in 3rd Res Bn in that rank from Nov 1916 On 11 December whilst on leave at home he absents himself for a period of 20 days, returning to barracks on 30 December 1916, there is no reference as to why and there is no record of any DCM other than an award of forfeiture of 20 days pay. He soldiers on with 3rdRes Bn until 25 June 1917 when again on leave he absents himself, this time for 6 days returning to Barracks on 30 Jun 1917. This time punishment is more severe with an award of 14 days detention plus forfeiture of 6 days pay for the period of absence. This is more severe than first sounds as periods in detention are unpaid hence his financial penalty is actually loss of 20 days pay with 14 days loss of liberty. On this occasion however we can elicit a rational for his absence in that he will have likely known he was due to be re drafted to the BEF and during this latest period of absence he married his sweetheart the 17 years old Margaret O’Rourke on 29 June 1917. He was perhaps keen to ensure he was married before his next deployment
Assuming his 14 days detention began on his return to Barracks on the 30 June 17, Patrick will have had no time for Goodbyes at home as he embarks in Folkestone for the BEF on 18 July  arriving later that day in Boulogne from where he travelled to No 20 Infantry Base Depot arriving there on 19 July 1917. After some days there he is posted to 13 Bn R Scots arriving at the Bn in the field on 6 August 1917.
Patrick is posted missing in action and later presumed killed in the major action of  22 August 1917 within third Battle of Ypres. The Bn War Diary states that the Bn suffered over 275 casualties that day including 3 Officers Killed, 3 Wounded and a further 3 wounded and missing. Patrick was amongst the many missing that day and later presumed killed in the very heavy enemy machine gun fire. His body was not recovered and he is commemorated on the Tyne Cot memorial

Can you tell us more about Patrick Quinn'? Some additional facts, a small story handed down through the family or perhaps a picture or an heirloom you can share online. Contact our curator...