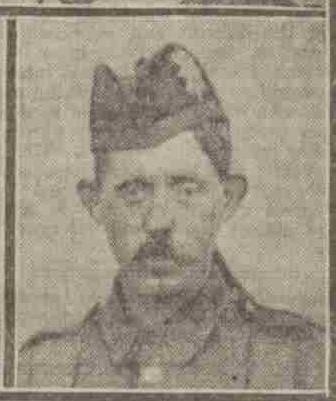 Patrick has no known grave but is remembered on the Le Touret Memorial. Next of kin listed as Joan Quinn, 59 Church St, Dundee.

Dundee’s soldiers of the Black Watch suffered heavily in the famous charge at La Bassee on 25th January.

Many deaths have already been reported, and Mrs Quinn, 33 Hospital Wynd, has now received official intimation of the death of her husband, Private Patrick Quinn, 1st Black Watch, who was killed in action when taking part in the memorable charge.

An officer of an English regiment has written Mrs Quinn stating that his men had buried her husband.  Private Quinn served with the old militia, and on the outbreak of the war attached himself to the National Reserve, from which he was transferred to the Black Watch.  He was 34 years of age, and was employed as a labourer.  A widow and five children mourn his loss.

Private Quinn’s two brothers are also soldiers, James is with the Argyll and Sutherland Highlanders in Egypt, and Michael is at present at the front.

Can you tell us more about Patrick Quinn'? Some additional facts, a small story handed down through the family or perhaps a picture or an heirloom you can share online. Contact our curator...