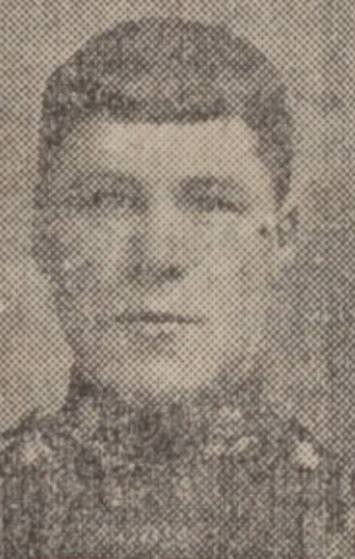 466 Pte. Peter Rafferty, 17th Lancers (Duke of Cambridge’s Own), attached 2nd Life Guards, was killed in action in France.
Rafferty was a pre war regular soldier, recalled to the colours at the outbreak of war in 1914.
The son of Mr and Mrs Peter Rafferty, 76 Blackscroft, his two younger brothers were also serving.
He is commemorated on the Ypres (Mening Gate) Memorial, West-Vlaanderen, Belgium.

DUNDEE LANCER MISSING. Mrs Rafferty, 76 Blackscroft, Dundee, yesterday received intimation that her son, Private Peter Rafferty, attached to the 2d Life Guards, had been missing since 31st October.
Private Rafferty, who is 26 years of age, served for eight years with the 17th Lancers, and had only completed his period eight months ago, when he returned to Dundee, and was employed with Ballingall & Son, Ltd., brewers. He was called up when war broke out, and as his regiment was still in India, he was attached to the 2d Life Guards.
Mrs Raffety has other two sons in the army, Peter (23) being a signalman in the R.N.V.R., and is at present on board the Magnificent, while Richard (25) is with the Dundee Territorials. The Courier, Saturday, 5 December 1914, 4.

Can you tell us more about Peter Rafferty'? Some additional facts, a small story handed down through the family or perhaps a picture or an heirloom you can share online. Contact our curator...