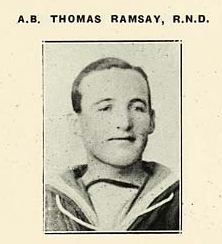 Before joining the Navy in January 1915 he was a butcher with Mr Thomas Duncan, High St, Carnoustie. He served at the Dardanelles, Egypt, and France, and was posted missing at Cambrai on the 31st December 1917. He was presumed to have died on that date. His commanding officer wrote:- “He fought most bravely and added fresh laurels to name of the Hood Battalion.”

Mr and Mrs James Ramsay, Mayview, Westhaven, Carnoustie, have received official news that their son, A.B. Thomas Ramsay, R.N.D., has been posted as missing since 31st December.  Prior to going to France, where he was wounded last April, Ramsay saw service in Gallipoli, Greece and Egypt.  He is 22 years of age, and in pre-war days was employed as a cleek finisher at Westhaven.

Can you tell us more about Thomas Ramsbottom Ramsay'? Some additional facts, a small story handed down through the family or perhaps a picture or an heirloom you can share online. Contact our curator...