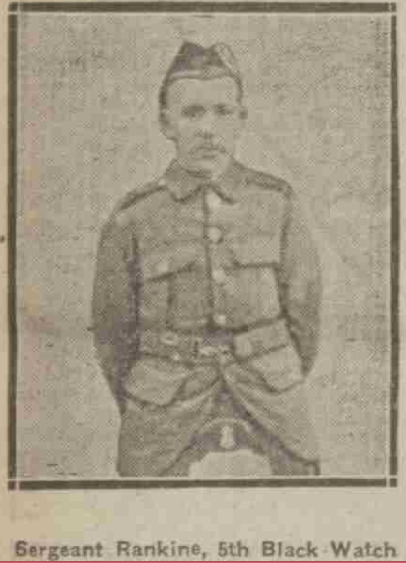 Pathetic circumstances attend the death in action of Sergeant George Rankine, a Dundee member of the 5th Black Watch.

The intelligence of her husband’s death was announced to Mrs Rankine, whose resides at 257 Hilltown by the receipt of the following letter from Private J. Lousam, Sergeant Rankine’s chum :–  “ The day George was wounded I stuck to him as a pal would do, and I got him to the hospital, but he lived only about two hours.  It was a sad blow to me, as we stuck well together since we left Dundee.”

Love to the Bairns.

In a letter dated 8th May, to his wife Sergt. Rankine said :–“I send my best love to all, and hope it will not be long before I see all my friends in Bonnie Dundee again.  Tell Aggie, Maggie, Bob and Georgina (his children) that their daddy sends his best love to them, and is longing to be home beside them.”

Sergeant Rankine, who was 33 years of age, has been in the “fifth” for ten years and was promoted from the rank of corporal to sergeant while at the front.  He leaves a widow and four children, one of whom was born since he went to France.

In a letter to a friend in Dundee Sergeant Rankine wrote regarding the fighting at Neuve Chapelle :– “Neuve Chapelle is a sight I will never forget to my dying day.  The bombardment started at 8.30 on the morning of 10th March, and the big guns, 450 in number, kept going for two and a half hours.   Then the infantry started.  We got up to the first line of German trenches.  The dead and dying were lying in hundreds on the great battlefield.  On the 11th we got orders to proceed from the reserve trenches to Neuve Chapelle to bring in the dead.  It was one of the most heartbreaking tasks I was ever set to in my life.  One came across photos of wives and children who would never see their loved ones again.  There was many a teardrop in my platoon, for we thought of our own wives and children and mothers at home.

“We have a church service every Sunday when we are out of the firing line, and it is a fine sight to see 700 or 800 of us at service and hear the guns roar all around us.”

Can you tell us more about George Farmer Rankine'? Some additional facts, a small story handed down through the family or perhaps a picture or an heirloom you can share online. Contact our curator...