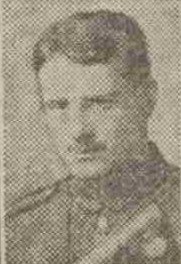 James was the brother of Able Seaman Robert Jamison Rattray, Clyde Z/287, of the Drake Battalion, Royal Navy who was killed in action 18.12.1915.

James like his brother was a former pupil of Grove Academy, Broughty Ferry and both brothers are remembered on the schools war memorial.

Intimation was received yesterday that a well-known Broughty Ferry lad had been killed in action.

Mrs Rattray, who resides in Prospect Terrace, received the sad intimation that another of her sons, Sergeant James M. Rattray, had made the supreme sacrifice.  Sergeant Rattray, who was thirty years of age, enlisted in the Fife and Forfar Yeomanry in 1914, and had seen much service in Gallipoli and Egypt.  Prior to the war he was cashier in Hillbank Works, Dundee.  His brother, who was in the Royal Naval Division, died in December, 1915.

The sympathy of the residenters of Broughty will go out to Mrs Rattray in her loss.

Can you tell us more about James Milne Rattray'? Some additional facts, a small story handed down through the family or perhaps a picture or an heirloom you can share online. Contact our curator...