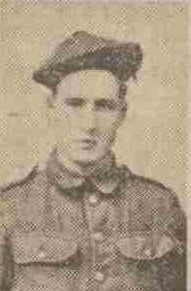 Corporal John Reeves, a member of the Royal Scots Fusiliers, who has been in the army for five years, is reported as missing.  His mother, Mrs Boyle, who resides at 34 Rosebank Road, has been officially notified that he has been missing since the 30th July.

Corporal Reeves was at Gibraltar with his regiment when war broke out, and has been on active service since practically the start of hostilities.  He was twice wounded previously.  The missing corporal is 23 years of age.

Can you tell us more about John Reeves'? Some additional facts, a small story handed down through the family or perhaps a picture or an heirloom you can share online. Contact our curator...