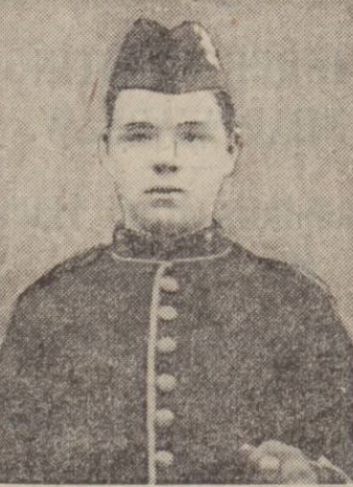 On 20 October 1914, The Courier reported that local soldier, 2009 Pte. James Reilly, 1st Black Watch, had been mentioned in despatches.
In civilian life Reilly was employed in Dudhope Mill.
One of the Battalion signallers, he was with the 1st Black Watch when it disembarked at Le Havre on 14 August 1914.
Sadly, James Reilly died of wounds on 4 November 1914, aged 21. He is buried in Poperinghe OldMilitary Cemetery, West-Vlaanderen, Belgium, I. L. 39.

DUNDEE BLACK WATCH HERO WHO IS MENTIONED IN DESPATCHES. Private James Reilly, 1st Black Watch, has brought honour upon Dundee, his native city.
The name of Private James Reilly (No. 2009), 1st Black Watch, appears in the despatches issued by Sir John French, Commander-in-Chief of the British Expeditionary Force. Dundee’s hero, who is but 21 years of age, was a millworker in Dudhope Mill before he joined the militia some four years ago. He transferred into the Black Watch, and from the outset became attached to the signalling corps. Private Reilly set himself to learn his new vocation thoroughly, and when on a visit to his sister, Mrs Cosgrove, 11 Watson’s Lane, with whom he resided when in Dundee, he used to practise hard with the flags, with the result that towards the close of last year he passed as a first-class signaller.
Mrs Cosgrove got the first intimation of her brother’s great distinction from the “Courier,” and she is naturally very anxious to know what has led to his name being mentioned. Private Reilly, who is of a quiet disposition, is about five feet eight in height, and his heart is fairly thirled in the “sodgers.” The Courier, Tuesday, 20 October 1914, 4.

Can you tell us more about James Reilly'? Some additional facts, a small story handed down through the family or perhaps a picture or an heirloom you can share online. Contact our curator...