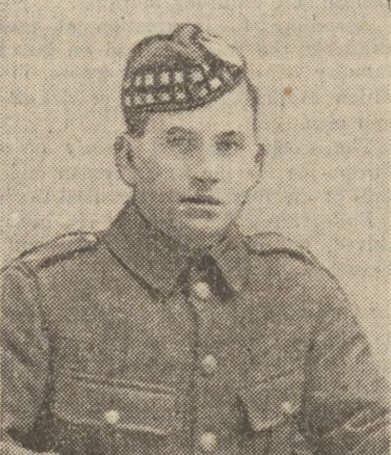 On 9 August 1915, S-7564 Pte. Patrick Reilly, 8th Gordon Highlanders, was killed in action in France, aged 24. The son of Mrs Jane Reilly, 2 Blackness Road, Dundee, Patrick was a tenter at Tay Works before the war. He is buried in Le Touret Military Cemetery, Richebourg-L’Avoue, Pas de Calais, France, II. A. 27.

DUNDEE SOLDIER LEAVES FOR ACTIVE SERVICE UNAWARE THAT HIS BROTHER WAS KILLED IN ACTION. Official intimation was yesterday received by Mrs Jane Reilly, 4 Temple Lane, Dundee, that her son, Private Patrick Reilly, Gordon Highlanders, was killed in action on 9th August. Private Reilly was 23 years of age, and was employed as a tenter in Tay Works, Dundee, prior to enlisting. A telegram containing the sad news was despatched to his brother, Private John Reilly, Durham Light Infantry, but intimation was sent that he had left for service abroad. The Courier, Wednesday, 18 August 1915, 4.

Can you tell us more about Patrick Reilly'? Some additional facts, a small story handed down through the family or perhaps a picture or an heirloom you can share online. Contact our curator...