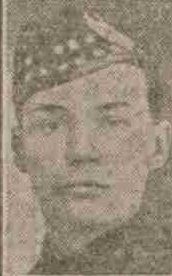 Harry has no known grave but is remembered on the Tyne Cot Memorial.

Mrs Rennie, 20 Black Street, Benvie Road, Dundee, has received information that her husband, Pte. Harry Rennie, was killed in action on 4th October.  Pte. Rennie, who joined the Gordons in September, 1916, was well known in Trade Union circles in Dundee, having been for some time secretary of the local branch of the National Union of Shop Assistants.  Previous to being called up he was in the employment of Mr Lindsay, grocer, Cleghorn Street, and had been at the front since December, 1916.

Can you tell us more about Harry Rennie? Some additional facts, a small story handed down through the family or perhaps a picture or an heirloom you can share online. Contact our curator...