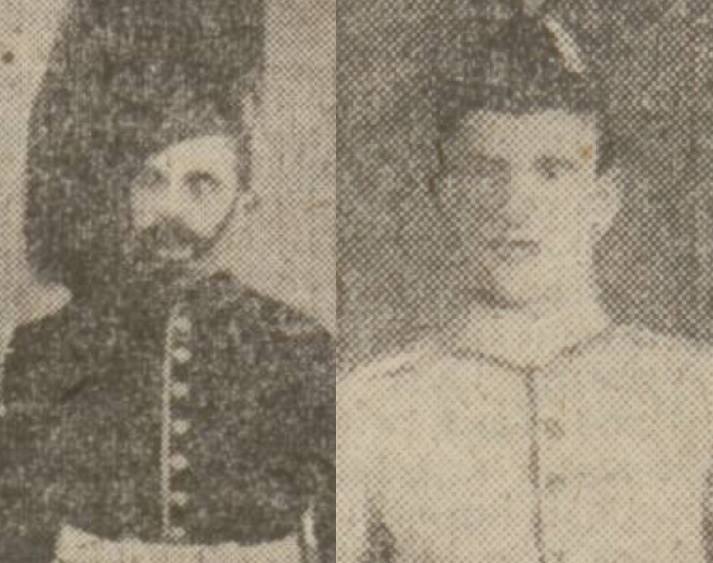 On 9 February 1916, The Courier reported on two local soldiers, both serving with the 2nd Black Watch, who were killed in action on 7 January 1916.
1791 Pte. George Burness (left), had served in France with the 1st Battalion from early September 1914, and was wounded at the Battle of the Aisne.
1426 Pte. Alexander Reoch (right), had served in the regiment for some seven years, and was in India at the outbreak of the war.
Both men are buried in the Amara War Cemetery, Iraq.

DUNDEE SOLDIER KILLED AT PERSIAN GULF. Official intimation has been received by Mrs Burness, 214 Lochee Road, Dundee, that her son, Pte. George Burness, 2d Black Watch, was killed in action at the Persian Gulf on 7th January.
Pte. Burness, who was thirty-one years of age, was called up as a reservist at the outbreak of war, he having previously served fourteen years with his regiment. He was wounded at the battle of the Aisne, and after being home on furlough for five months returned to France and was transferred to the Persian Gulf. He was previously employed by George H. Lord & Son, Park Machine Works, Douglas Street.

DUNDEE SOLDIER KILLED IN MESOPOTAMIA. Official intimation has been received of the death in action in Mesopotamia of Private Alexander Reoch, 2d Black Watch.
Private Reoch, who was 23 years of age, had been in the army for about 7 years. At the commencement of hostilities he came to France from India with the 2nd Black Watch, and was with that regiment when it was transferred to Mesopotamia a few months ago. Private Reoch was, prior to enlistment, employed as a blacksmith by the firm of Gourlay Brothers, & Co., Ltd., Dundee. The deceased soldier was a son of the late Mr A. S. Reoch, hairdresser, Dundee.
A brother of Private Reoch – Sergeant John Reoch, 1st Black Watch – died about 15 months ago of wounds received in France. The Courier, Wednesday, 9 February 1916, 4.

Can you tell us more about Alex Reoch'? Some additional facts, a small story handed down through the family or perhaps a picture or an heirloom you can share online. Contact our curator...