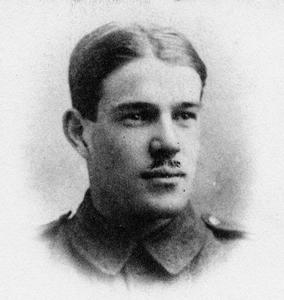 Second Lieutenant Philip Rettie, son of Mr William Rettie, Balcairn, and Second Lieut. George Cleghorn, son of Mr William Cleghorn, Bayfield, West Ferry, are reported to be wounded.  Lieut. Rettie, is attached to the Border Regiment, and no news has so far been received as to the extent of his injuries.  His two brothers are also on active service, one being a Captain in the 4th Black Watch, and the other in the navy. He was formerly a law apprentice with Messrs Pattullo & Donald, Dundee, and received his commission in February of last year.

No further news has been received regarding the fate of Lieutenant W. Philip Rettie, of the Border Regiment, son of Mr William Rettie, Balcairn, Dundee, who was reported missing on 1st July last.  According to information received by his parents from a brother officer of Lieutenant Rettie, the battalion got orders to advance in the early morning, and immediately came under furious machine gun fire from the enemy.  About ten yards in front of the firing line from which they had advanced Lieutenant Rettie was hit in the thigh, and was accordingly told to drop back into the trench, and get his wound dressed as soon as possible.  The gallant officer, however replied that he would try “to carry on.”  Advancing further towards the enemy’s lines, Lieutenant Rettie, it is greatly feared, was again hit, this time fatally.  Nothing further has been heard about him, and unfortunately, there is little room for hope that he was made a prisoner.

Lieutenant Rettie, was educated at Seafield House, Broughty Ferry, and Fettes College, and later entered the office of Messrs Pattullo & Donald as a law apprentice.  He has two brothers also serving, one in the navy and the other in the army.

At the annual meeting of Dundee Dental Hospital this afternoon it was intimated that Mr and Mrs William Rettie, Balcairn, had purchased and gifted to the Directors 10 commodious premises at No. 2 Park Place to be used as a dental hospital.  The gift is in memory of Mr and Mrs Rettie’s son, Second-Lieut. William Philip Rettie, the Border Regiment, who fell in action on the Somme on 1st July, 1916.  The property adjoins the present hospital, which is only rented for the purpose, and is in close proximity to University College.  Mr Rettie is the president of Dundee Dental Hospital.

Can you tell us more about William Philip Rettie'? Some additional facts, a small story handed down through the family or perhaps a picture or an heirloom you can share online. Contact our curator...