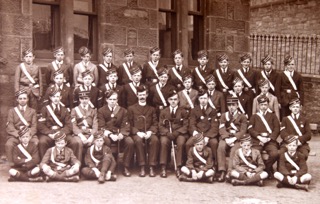 The Reverend Matthew Babington was born in Kilwinning in 1877 and was awarded a bursary to Glasgow University, graduating MA BD and being a prize winner in theology. He was minister of the Church of Toward, on the peninsula south of Dunoon, for several years before his appointment to St Mary’s, Dundee, as Assistant to Dr Fergusson from 1916 until 1919.

For part of 1918 he was absent from his St Mary’s duties as he voluntarily enlisted in the Army, serving in France with the Royal Garrison Artillery. He volunteered for military service early in 1918 but was not, as you might expect a chaplain. He had the rank of Gunner, the official term for a Private in the Artillery. So he may well have seen action in the battles in France and Flanders in the closing months of the War.

He appears as an officer in a photograph of the 24th Company Boys Brigade taken in 1919, probably just a few months after the Armistice of 11th November. Mr Babington took a very keen interest in the work of the Boys Brigade, not only of the Company but also of the Dundee Battalion.

He returned to his duties at St Mary’s, Dundee after the war ended and in 1919 he became minister of Glamis. He married a widowed lady there and they were largely responsible for the re-ordering or ‘modernisation’ of the sanctuary.

Reverend Matthew Babington died in Dundee on 7 June 1942 while still Minister of Glamis.

Can you tell us more about Matthew Babington'? Some additional facts, a small story handed down through the family or perhaps a picture or an heirloom you can share online. Contact our curator...