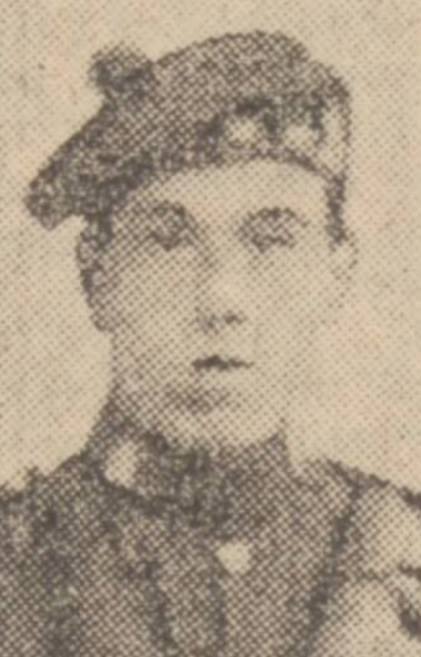 S-40367 Pte. Allan Rintoul, 9th Black Watch, was killed in action on 9 April 1917, during the attack on Railway Triangle.
Rintoul was an apprentice compositor with The Courier, joining the Scottish Horse in November 1915, before being transferring to the Black Watch.
He went into action in the same battalion as his brother, Pte. Richard B. Rintoul, who informed his parents of Allan’s death. Richard located his brother’s body and buried him on the battlefield.“COURIER” EMPLOYEE MAKES SUPREME SACRIFICE. To Private Richard B. Rintoul, Black Watch, fell the sad task of informing his parents, who reside at 19 Morgan Street, Dundee, that his brother, Private Allan M. Rintoul, had been killed in action.
In his letter Richard says – At the taking of the first objective Allan and I went over together, and it was at the second objective that I lost sight of him.
Afterwards a chap told me he was killed, so I went and looked for him, and got him. I think he must have been shot by a German sniper. I buried him the next day, along with another two fellows.
Deceased, who was 20 years of age, was an apprentice compositor on the staff of the “Courier.” He joined the Scottish Horse in November, 1915, but was afterwards transferred to the Black Watch. He had been eight months in France. The Courier, Friday, 20 April 1917, 4.

Can you tell us more about Allan Rintoul'? Some additional facts, a small story handed down through the family or perhaps a picture or an heirloom you can share online. Contact our curator...