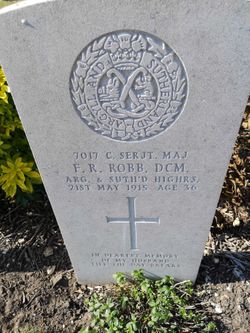 By the death of Company Sergeant-Major Frederick Ramsay Robb, of the 1st Argyll and Sutherland Highlanders, in the base hospital, Rouen, on Friday from wounds received in action on 6th April, a young wife, resident at St Margaret’s Rectory, Lochee, has been left to mourn the loss of a husband to whom she had only been married about a dozen hours before he had to leave for the Continent.

His mother, who belongs to Dundee, but is now living at 4 St Mary’s Place, Aberdeen, experiences the sorrow caused by the first break in the ranks of nine sons, all of whom have taken a share in serving King and country in the army.

There was something like hereditary tradition followed in this case, for the Company Sergeant-Major’s father was the late Sergeant William Robb, who served for 21 years in the Argyll and Sutherland Highlanders, and who was also connected with Dundee.  The late Company Sergeant-Major served for 16 years in the regiment mentioned, joining as he was leaving his teens, and gaining the Queen Victoria and King Edward VII. Medals for active service in South Africa, while he was also stationed for a time at Malta and India, coming home from the latter place for three or four days to get married and almost immediately to leave with his regiment for the fighting line.  Three weeks ago, the hospital authorities sent a message to Dundee desiring that his wife should come to Rouen, and this she did.

This week, when recruiting is in progress in Dundee for the 14th Battalion Argyll and Sutherland Highlanders, this record of the Robb family is interesting.  Of the nine brothers who followed the example of their late father in joining the army, the eldest William, has been pipe-major in the Argyll and Sutherland Highlanders for over twenty-one years.  The second, John, served for fourteen years with the regiment, and went through the South African campaign.  The third, Alexander, served for thirteen years, and went through operations on the North-West Frontier of India, being placed in a Government appointment when invalided home.  As mentioned, Frederick has answered the last roll-call from Rouen.  David, with twelve years’ service, went through the South African War; Ernest is with the Canadian contingent at the front; Frank is with the Aberdeen Battalion of Royal Engineers; Albert is with the Royal Flying Corps in France; and the youngest, James; also associated himself with the Royal Engineers.

Can you tell us more about Frederick Ramsay Robb'? Some additional facts, a small story handed down through the family or perhaps a picture or an heirloom you can share online. Contact our curator...