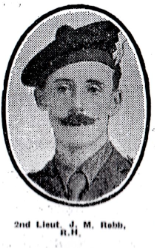 His many friends in Dundee and district will learn with regret that Second-Lieutenant William J. M. Robb was killed in action on 20th July.  Official notice has been received by his parents, Mr and Mrs A. W. Robb, Elmbank, Perth Road, Dundee.  For six years prior to 1914 Lieutenant Robb was a member of the Fife and Forfar Yeomanry, and he volunteered for service at the outbreak of war.  He went through the Gallipoli campaign.  In March, 1917, he obtained a commission in the Black Watch, and since he left for France he had been twice previously wounded.  He was home only four weeks ago.  Lieutenant Robb was educated at the Grove Academy, Broughty Ferry, and the Harris Academy, and after serving his apprenticeship in the city he went to the Rhondda Valley Tramway Company.  He was 30 Years of age.  His brother is in the R.N.A.S.

Can you tell us more about William John Mechan Robb'? Some additional facts, a small story handed down through the family or perhaps a picture or an heirloom you can share online. Contact our curator...