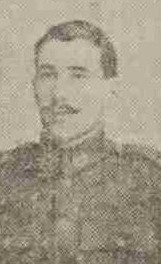 This man was residing in Dundee when he enlisted in the Army.

Deceased who was 20 years of age, enlisted over two years ago, and saw service at the Dardanelles.  He was wounded in France, and was only a short period back again when he was killed.  Prior to enlisting Lance-Corporal Ashwood was employed as second steward in the County Club, Stirling.  A brother, George, is serving with the colours.

Can you tell us more about Robert Ashwood'? Some additional facts, a small story handed down through the family or perhaps a picture or an heirloom you can share online. Contact our curator...