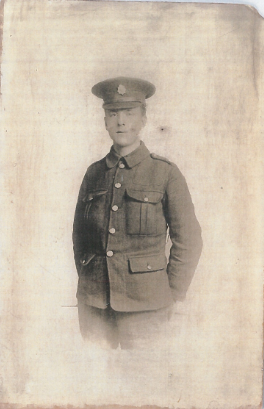 Charles was a former Dundee High School pupil, keen cricketer and footballer. Worked as a clerk in Walton Works jute mill. Answered advert in Dundee Courier 12 January 1915, that stated that the Army Service Corps were looking for wheelers, clerks and bakers. He enlisted shortly thereafter. He was placed in 102 company, 14 Divisional train. Sailed to Le Havre in May 1915 which was an ASC base depot. Moved through various billets in West Flanders until they were 5 miles behind the rear of HQ in the Ypres salient.  On 17 August 1915 he was sent out in a Harvesting party and was dangerously wounded by four shrapnel wounds to the head and abdomen at 1.30pm. He died at 7.35am the following day.

Private Charles A. Robertson, Abercromby Villa, Lochee, who has died of wounds in a hospital abroad.

Can you tell us more about Charles Alexander Robertson'? Some additional facts, a small story handed down through the family or perhaps a picture or an heirloom you can share online. Contact our curator...