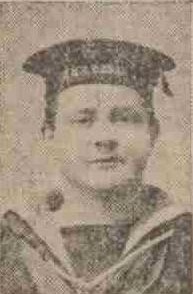 The Dundee members of the crew of the ill-fated Formidable included John A. Robertson, whose parents reside at 22 Wolseley Street.  His name has not appeared in the lists of survivors, and it is feared that the gallant gunner has gone down with the ship.  Robertson who was unmarried, was a navy man of many years experience.

Alexander has no known grave but is remembered on the Chatam Naval Memorial. He was serving aboard H.M.S. Formidable, 15,250 tons, pre-Dreadnought Battleship, launched in 1898, first commissioned in 1901 and torpedoed by German U-boat 24 on New Year’s Day 1915 while on exercises. She sank in 180 feet of water about 37 miles off the Devon coast, the first British battleship to be sunk in the First World War.

H.M.S. Formidable was sunk by two torpedoes from a German submarine 20 miles off Start Point at 2 am, 1st January 1915, in the first year of the First World War. The first torpedo hit the number one boiler port side; a second explosion caused the ship to list heavily to starboard. Huge waves thirty feet high lashed the stricken ship, with strong winds, rain and hail, sinking it in less than two hours

Can you tell us more about Alexander Robertson'? Some additional facts, a small story handed down through the family or perhaps a picture or an heirloom you can share online. Contact our curator...