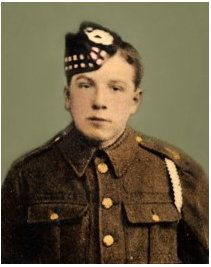 John was killed in action, he shares a burial plot with Pte William Rodger, 300716, 10th Battalion Seaforth Highlanders, who was also killed in action 30.09.1918 aged 29, he was the son of John & Elizabeth Rodger, he was born in Armadale, enlisted at Campbelltown and was residing in Lanark at the time of his enlistment.

“A Good and Brave Soldier.”

Mrs Alexander Robertson, 28 Crescent Lane, has received intimation that her son, Private John Robertson, Argyll and Sutherland Highlanders, was killed in action on 30th September.  In a letter received from his lieutenant, it is stated that Private Robertson was shot by a machine gun during an attack on the enemy, and was buried with his comrades who fell with him.  Continuing, the officer states :–“In your son I have lost a good and brave soldier who always did his duty.”  In civil life Private Robertson was an apprentice pastry cook in Lamb’s Hotel, Dundee.  He had been in France since April, and was 19 years of age.  His brother, Gunner Alexander Robertson, R.F.A., has just been discharged from hospital in France, having been gassed on 26th July, his 21st birthday.

Can you tell us more about John Dobbin Robertson'? Some additional facts, a small story handed down through the family or perhaps a picture or an heirloom you can share online. Contact our curator...