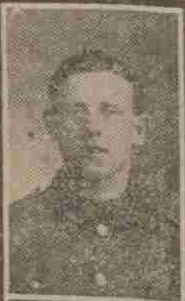 Pte. John Robertson, son of Mr Jas. Robertson, 7 Ellen Street, Dundee, and one of three brothers serving, has been posted as missing from the 3rd Sept.  Private Robertson was in the Black Watch, and he had been at the front since January, 1915, while previous to joining he was employed in the city as a hacklemaker.  Another brother is also at the front, while a third is in the navy.

John was the brother of Able Seaman James A. Robertson, Clyde Z/7876, who was lost at Sea when his ship H.M.S. Opal ran aground on the ‘Clett of Crura’, South Ronaldsay on 12 January 1918 with the loss of 188 men, there was only one survivor.

Private John Robertson, Black Watch, who has been killed in action, was 19 years of age, and a son of Mr James Robertson, 7 Ellen Street.

Private Robertson joined up in January, 1915, went to France in July of the following year, and had been only two months at the front when he was reported missing.  Before enlisting deceased was a hacklemaker with Messrs W. R. Stewart & Sons, Dens Road.

Can you tell us more about John Robertson'? Some additional facts, a small story handed down through the family or perhaps a picture or an heirloom you can share online. Contact our curator...