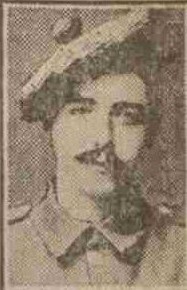 John has no known grave but is remembered on the Ploegsteert Memorial.

Pte. John Rodger, Black Watch, son of Mrs Rodger, 45 Watson’s Lane, who was formerly reported wounded and missing, is now reported to have been killed in Action on 19th July.  Pte. Rodger enlisted in November, 1916, and on 23d August of the following year he was wounded.  He returned to France in April last.  Prior to joining up he was employed with Don Brothers, Buist, & Co., Limited, Ward Mills.

Can you tell us more about John Ducat Rodger'? Some additional facts, a small story handed down through the family or perhaps a picture or an heirloom you can share online. Contact our curator...