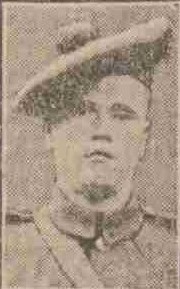 There is no Andrew Ross 4081, Black Watch listed on either C.W.G.C. or S.D.G.W. His service number was 201022 but was listed on the original Dundee Roll of Honour with his original number.

Mrs Ross, who resides at 8 St Roque’s Lane, Dundee, has received intimation that her son, Pte. Andrew Ross, of the Black Watch, has been missing since October.  Prior to joining the colours some time ago, he was employed in the city as a millworker.  Any news regarding the fate of Private Ross will be gladly received by his mother.

Can you tell us more about Andrew Ross'? Some additional facts, a small story handed down through the family or perhaps a picture or an heirloom you can share online. Contact our curator...