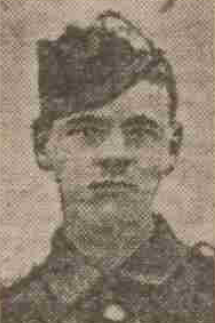 James has no known grave but is remembered on the Arras Memorial. He was the brother of L/Cpl William Ross, who also served with the Black Watch and returned home safely.

Private James Ross, Black Watch, was a Dundee Territorial, and went to the front two years ago.  He was missing for four days, and was later buried by a shell.  He had a spell of furlough, and returned to France a year ago.  He is the son of Mrs Ross, 61 Derby Street, Dundee.

Can you tell us more about James Ross'? Some additional facts, a small story handed down through the family or perhaps a picture or an heirloom you can share online. Contact our curator...