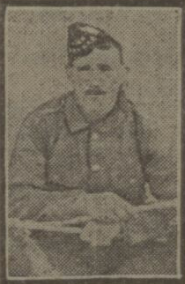 Private John Ross, of the 3d Gordon Highlanders, who is officially reported to have died of wounds on 20th July.  Private Ross was previously officially reported killed after the battle of Neuve, but wrote to his wife some time afterwards stating that he was quite well.  He was a Reservist, and was previously employed as a dock labourer.  Deceased was 34 years of age.  He is survived by a widow and three children, who reside at 2 Park Lane.

Can you tell us more about John Ross'? Some additional facts, a small story handed down through the family or perhaps a picture or an heirloom you can share online. Contact our curator...