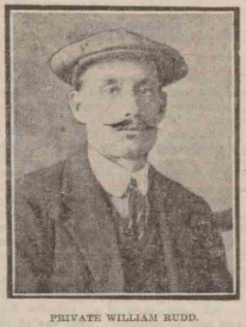 William has no known grave but is remembered on the Loos Memorial. His brother Charles served with the Highland Light Infantry during the Great War.

But is Killed at German Trenches.

A Dundee man has nobly died while taking over the command of his section when the commander had been placed out of action.

Writing to Mr Henry G. Rudd, 92 Blackscroft, Dundee, a comrade, after referring to the death of his brother, Private William Rudd, 1st Black Watch, says :–“His company was in reserve when they received orders to reinforce the firing line.  His section commander was wounded, and Private Rudd immediately took over command, but when he had reached within a few yards of the opposing trenches he was shot dead through the temple.”

A reservist, Private Rudd, who was 29 years of age and unmarried had been six years in India, where he was well known as a footballer and Highland dancer.  His brother Charles has since the outbreak of war joined the H.L.I.

Can you tell us more about William Rudd'? Some additional facts, a small story handed down through the family or perhaps a picture or an heirloom you can share online. Contact our curator...