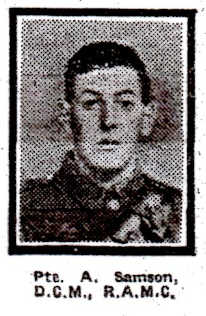 Private Alexander Samson was the son of Helen and Charles Samson,  of ‘Braehead’, Forfar.

Private Alexander Samson, R.A.M.C., a Dundee D.C.M., has been killed in action.

The deceased soldier, whose widow resides at 3 Annfield Street, Dundee, was 40 years of age.  He was an old Volunteer, and at the commencement of the war was in the Territorials.  Private Samson was at first attached to the Royal Field Artillery, but was later transferred to the Royal Army Medical Corps.  He had been in France for seventeen months, and only last August was awarded the Distinguished Conduct Medal for conspicuous service.  Prior to the outbreak of war Private Samson was employed by Messrs Thomson, Shepherd, & Co., Ltd., Seafield Works, Dundee.  His only son is at present serving with the Royal Engineers at the front.

Can you tell us more about Alex Samson'? Some additional facts, a small story handed down through the family or perhaps a picture or an heirloom you can share online. Contact our curator...