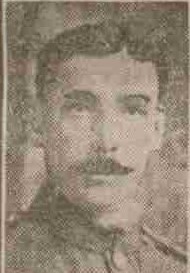 Pte. Samuel Anderson, Black Watch, died in a French hospital on the 16th inst., from wounds received in action on 20th July.  Pte. Anderson enlisted on the outbreak of war.  He had taken part in a great deal of heavy fighting, and had once before been wounded.  He leaves a widow and five young children, who reside at 17 Kinnaird Street.  Pte. Anderson, who was formerly employed in the batching-house of Bowbridge Works, was one of three soldier sons of Mr David Anderson, St Salvador Street.  Pte. John Anderson, who was also in the Black Watch, was killed in action at Neuve Chapelle, and William is in the Royal Scots.

Can you tell us more about Samuel Anderson'? Some additional facts, a small story handed down through the family or perhaps a picture or an heirloom you can share online. Contact our curator...