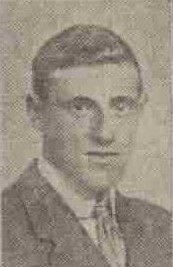 Andrew has no known grave but is remembered on the Thiepval Memorial. He was the brother of Pte John Sandison S/17126, 2nd Battalion Black Watch, who died of Malaria 02.02.1919.

The many friends of Mr and Mrs Charles Sandison, 25 Campbell Street, Lochee, will regret to learn that their son, Private Andrew Sandison, has been killed in action.  Deceased was 24 years of age, and unmarried, and prior to his enlistment in August 1914 followed a seafaring career, being quarter-master on one of the White Star liners.  He joined the Argyll and Sutherland Highlanders at, the outbreak of hostilities, but was transferred to the machine gun section, and had been at the front for fully a year.  Other five members of the family are at present serving their King and country.  Frank is a member of the Mechanical Transport Corps, Peter is in the ranks of the Black Watch, Sam it with the Cameron Highlanders, Charles is under training with the Royal Garrison Artillery, while William is a member of the Australian Expeditionary Force.

Can you tell us more about Andrew Sandison'? Some additional facts, a small story handed down through the family or perhaps a picture or an heirloom you can share online. Contact our curator...