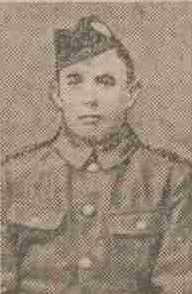 Charles has no known grave but is remembered on the Thiepval Memorial.

Intimation has been received by Mrs Scotland, 18 Taylor Street, Lochee, of the death in action on 13th August of her son, Pte. Charles Scotland, Scottish Rifles. Previous to joining the colours some six months ago, deceased was employed as a carter by Mr John Findlay, contractor, Lochee.  He has been at the front for about three months.  Deceased was 23 years of age.  Mrs Scotland has a son serving in the R.A.F.

Can you tell us more about Charles Morris Scotland'? Some additional facts, a small story handed down through the family or perhaps a picture or an heirloom you can share online. Contact our curator...