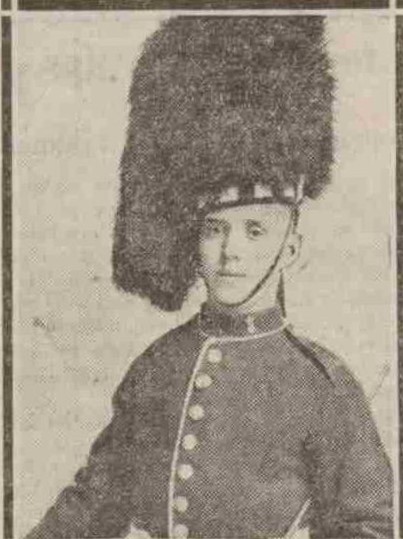 David has no known grave but is remembered on the La Ferte Memorial.

AND HIS BROTHER SERIOUSLY WOUNDED.

Yet another Dundee name has been added to the long roll of heroes who have fought and died for their country.

The sad news has been conveyed to Mr and Mrs William Scott, 5 Temple Lane, that their youngest son, David, was killed in action on 23rd September.

Private David Scott, who was a member of the 1st Black Watch, was only 20 years of age.  He joined the ranks about two years ago. Previous to entering the army he was an assistant motor vanman in the employment of William Millar & Sons, grocers, Dundee.  Since the beginning of the war Private Scott had sent home field-cards on several occasions, stating that he was getting on well, but giving no particulars regarding the fighting.

Another brother, William Scott, who is married, and whose home is at 60a Liff Road, Lochee, has been wounded, and is at present lying in hospital at Plymouth.  His injuries are of a serious nature, and it was at first feared that he would not recover.  William received two wounds in the legs, and one of the limbs was broken.

Alexander Scott, another brother, is also at the front, engaged in the particularly dangerous capacity of driver in the Royal Engineers.

Private David Scott, who was the youngest son of the family, was an extremely popular young lad, and his death will be learned with regret by his many friends.  He was well-known in Brechin, where his parents resided for over twenty-five years, coming to Dundee only two years ago.

Can you tell us more about David Scott? Some additional facts, a small story handed down through the family or perhaps a picture or an heirloom you can share online. Contact our curator...