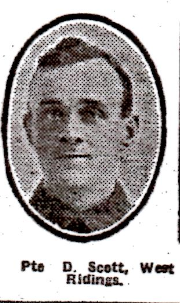 KILLED IN ACTION IN FRANCE.

Private David Scott, youngest son of the late Mr David Scott and Mrs Scott, 55 Cobden Street, Lochee and late of Monikie, who was reported wounded and missing early in November, is now officially stated to have been killed in action on 1st November.  He enlisted in the Royal Scots in March, 1916, and was afterwards transferred to the West Riding Regiment, and had been in France for a period of 21 months.  In civil life he was employed as a conductor on the Broughty and Monifieth tramways.  He was 23 years of age and unmarried.

Can you tell us more about David Scott'? Some additional facts, a small story handed down through the family or perhaps a picture or an heirloom you can share online. Contact our curator...