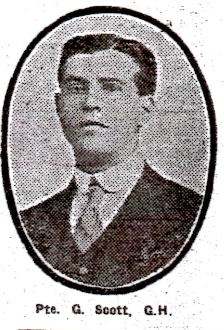 TOUCHING LETTER FROM CHUM IN HOSPITAL.

The shadow of death hangs over a Dundee household.  Sad news from the front reached the city yesterday regarding the fate of George Scott, a private in B Company of the Gordon Highlanders.

Private Scott’s father resides at 41 Rosebank Street, and the news was broken to the family in dramatic fashion.

It came from a soldier in hospital unknown to the family, but who was apparently a chum of George at the front.  The writer was J. Beattie, who stated that he belonged to Glamis, where his wife at present resides.

The letter read that he was sorry to inform that George died on 10th September.  He got a gun shot wound in the leg and went through an operation successfully, but he was to weak to stand it.  He could only say that the surgeons and nurses did their very best for him, and he saw him at the last, which was peaceful.

The nurses were to set his grave in order when the war was over, and would try to get a photograph of it and send it on.  If he had the luck to come back he would come to Dundee and tell them all about it.  He wished he could have sent better news.

Despite the apparent frankness of the letter George Scott’s father is not without hope that some mistake has been made, as although his son is said to have died on 10th September no official intimation has been received.

He could not explain the situation, but thought that Beattie and his son had been captured by the Germans at Mons after being wounded and that probably he had died later, no intimation being made by the German authorities to the British.

He hardly believed that the War Office would withhold such information.  The letter does not state in which hospital George breathed his last.

Private Scott was a typical true-hearted Tommy.  After having served seven years in India he returned home two years ago, and up till the outbreak of the war had been employed as a postman in the Glenisla district.  His father had heard that there was a postman at Glamis named Beattie, and supposed that the two might have met there.

Scott was on holiday in London when he was called up as a reservist.

Can you tell us more about George Scott'? Some additional facts, a small story handed down through the family or perhaps a picture or an heirloom you can share online. Contact our curator...