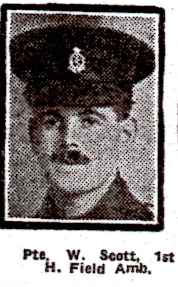 Lance-Corporal Scott, who was 26 years of age, was previous to enlistment, employed as a clerk with the Dundee Meat Market Company, Limited.  He was well known amongst farmers and butchers in the district.  He took an active part in the work of the Dundee Branch of the Y.M.C.A.  He enlisted in October, 1914, and was in France for a year.  Mr and Mrs Scott have three other sons serving.  John is in the R.A.M.C., Robert in the A. and S.H., and Alexander in the Royal Scots.

Can you tell us more about William Scott'? Some additional facts, a small story handed down through the family or perhaps a picture or an heirloom you can share online. Contact our curator...