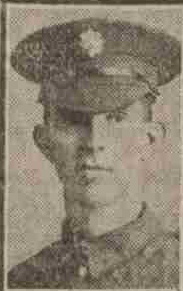 Pte. Charles Shand, Scots Guards, sixth son of Mr Robert Shand, 30 Benvie Road, Dundee. Has died of wounds in a casualty clearing station.  Pte. Shand, who was 23 years of age, was previous to enlistment, a furrier in the employment of Mr George Cooper, 43 Reform Street, Dundee.  Official intimation of his death has been received by his father, who has also got word that his son died a few hours after receiving his wounds.  Mr Shand has three sons still serving with the colours, two in the Mechanical Transport and one in the R.A.M.C.

Can you tell us more about Charles Alexander Shand'? Some additional facts, a small story handed down through the family or perhaps a picture or an heirloom you can share online. Contact our curator...