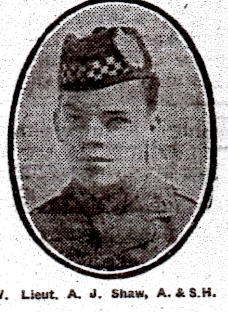 Alexander has no known grave but is remembered on the Thiepval Memorial. He was the brother of 2nd Lieutenant Thomas Gordon Shaw, Royal Flying Corps, who was killed in action 17.03.1918.

CRACK SHOT, WHO COMPETED AT BISLEY.

Another promising young Dundee officer has fallen at the front.

Mr Thomas Shaw, 14 Albany Terrace, has received official intimation of the death in action on 12th October of his eldest son, Second-Lieutenant Alexander Jack Shaw, of the Argyil and Sutherland Highlanders.

The deceased officer was educated at Fettes College, Edinburgh, and was a member of the O.T.C., in which he took a very keen interest, and the shooting team.  He was a crack Shot, and represented Fettes College in the Public Schools Competition at Bisley in 1914.  Lieutenant Shaw obtained his commission about eighteen months ago, and went out to the front early in July of this year.  He was only 19 years of age.

Can you tell us more about Alexander Jack Shaw'? Some additional facts, a small story handed down through the family or perhaps a picture or an heirloom you can share online. Contact our curator...