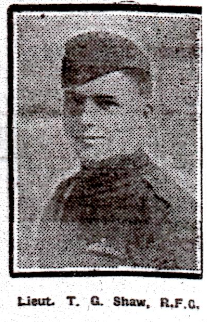 Thomas has no known grave but is remembered on the Arras Flying Memorial. He was killed in action whilst piloting a Spad S13 B6843. Airmen Died in the Great War records his squadron as the 23rd.

Lieutenant Shaw, who is 19 years of age, was educated at Fettes Collage, Edinburgh, and was a n.c.o. in the Officers Training Corps.  He joined up a year ago, and has been in France exactly five weeks.

A fellow -officer, writing to Lieutenant Shaw’s mother says:–”Your son was one of the nicest fellows I have met, and full of pluck.  Only yesterday he went in and finished off a Hun at close range.  As far as I can gather, his formation was dived at by ten Albatross Scouts who came out of a cloud. Our people dived, but your son was unlucky and they got him.”

Lieutenant Shaw was the only survivor of three sons, and deep sympathy will be extended to Mr and Mrs Shaw on the sad news which they have just received.  The youngest son died in 1915, while their oldest boy, Lieutenant A. J. Shaw, A. and S. Highlanders, was killed in action in October, 1916.

The Last of Three.

Second-Lieutenant Thomas Shaw, R.F.C., who was reported missing in France on 17th March, is now believed to have been killed on that date.  Lieut. Shaw, who was 19 years of age, was the second and last surviving son of Mr and Mrs Thomas Shaw, 14 Albany Terrace, Dundee. He was educated at Fettes Collage, and was a non-commissioned officer in the O.T.C.  He joined up in March, 1917, and had been in France for five weeks.  Mr and Mrs Shaw’s eldest son, Lieut. A. J. Shaw, Argyle and Sutherland Highlanders, was killed in October, 1916, and their youngest boy died in 1915.

Thomas was the brother of 2nd Lieutenant Alexander Jack Shaw, 4th Battalion, Argyll & Sutherland Highlanders, who was killed in action 12.10.1916.

Can you tell us more about Thomas Gordon Shaw'? Some additional facts, a small story handed down through the family or perhaps a picture or an heirloom you can share online. Contact our curator...