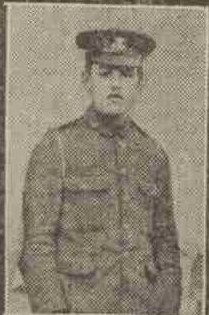 Mr Thomas R. Shepherd, 6 Rosefield Street, Dundee, has received official intimation of the death in action on 30th May of his son, Lance-Corpl. John Mitchell Shepherd, a member of the 3d Dragoon Guards.  A Captain in a letter to Mr Shepherd states that Lance-Corpl. Shepherd was killed by a high explosive shell while in his trench, and death was instantaneous.  Deceased was 25 years of age, and his seven years’ service with his regiment would have terminated next month.  He was drafted to France from Cairo, where he had been for over two years.  Before throwing in his lot with the Dragoon Guards, Shepherd was employed in the Post Office, but he gave up that situation for one as a signal-man, and latterly worked in the engine sheds to gain experience for an engine-driver.

Can you tell us more about John Mitchell Shepherd'? Some additional facts, a small story handed down through the family or perhaps a picture or an heirloom you can share online. Contact our curator...