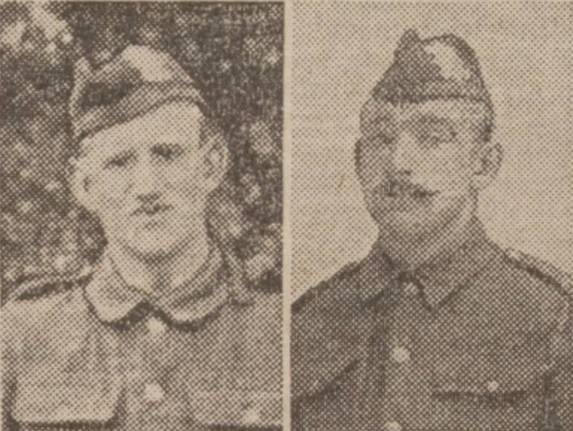 On 24 July 1915, 4114 Pte. James Burgess (right), 4/5th Black Watch, was killed in action in France, aged 26. Tragically, he died only six days after his brother-in-law, S-9243 Pte. Alexander Neil Shields (left), 8th Black Watch, who was killed during the capture of Longueval, aged 21. Both men were farm servants before the war.
Burgess was born and enlisted in Dundee. He is buried in Gorre British and Indian Cemetery, Pas de Calais , France, II. E. 12. Shields is commemorated on the Thiepval Memorial.BROTHERS-IN-LAW FALL IN ACTION. The photographs are of two Loch of Liff soldiers, a son and son-in-law respectively of Mr John Shields, grieve, who made the supreme sacrifice within a few days of each other. Both belonged to the Black Watch, but were members of different battalions.
Pte. Alexander Shields, the son, fell on the 18th of last month. He was 21 years of age, and previous to enlistment was a farm servant. Mr Shields’ son-in-law, Private James Burgess, was killed in action six days later. He was 26 years of age, and leaves a widow and two young children. Private Burgess was also an ex-farm servant, although for a time prior to his enlistment he was in the employment of Mr David Horsburgh, contractor, Dundee. The sincere sympathy of the district is extended to the family in their double bereavement. The Courier, Tuesday, 15 August 1916, 4.

Can you tell us more about Alexander Neil Shields'? Some additional facts, a small story handed down through the family or perhaps a picture or an heirloom you can share online. Contact our curator...