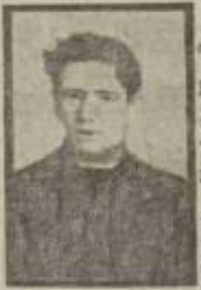 Still another Dundee soldier has made the supreme sacrifice.  Mrs Short, 42 Horsewater Wynd , has received information regarding the death of her son, Private John Short, 2nd Black Watch.

The intimation of Short’s death was contained in a letter addressed to his mother by a comrade, Private James Smith.  Writing on 15th inst. Private Smith says :___”This letter will be the bearer of sad news about your son John.  He was killed in action on the afternoon of 10th inst.  His death was instantaneous, caused by the bursting of a German shell.  His death was greatly felt among his comrades, and we all sympathise with you in your bereavement.  He was admired by all who knew him, and he died a noble death.”

Enclosed in the envelope was a piece of kilt, to which was attached a small Roman Catholic medallion of aluminium.

Private Short was nineteen years of age.  He enlisted last May, and was drafted to the front in December.  His brother Edward, also of the 2nd Black Watch, was with his regiment in India, and travelled to France with the Indian Expeditionary Force.  He is home now recovering from a bullet wound in the leg.

Private Edward had a startling experience at the front. A trench in which he was fell in, and buried him.  He was dug out just in time.

Private Short’s father also a soldier, met his death under tragic circumstances about a month ago.  He was found dead in a Perth street.

Can you tell us more about John (Jr) Short'? Some additional facts, a small story handed down through the family or perhaps a picture or an heirloom you can share online. Contact our curator...