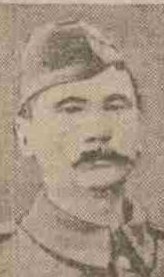 Private Robert Sibbald, Royal Scots, has died from injuries received while on duty in this country.  Deceased who was 45 years of age, was on duty on a home station, and during a gale about the middle of November he was blown over a dangerous cliff, and received internal injuries from which he died.

Private Sibbald had seen ten years’ service in the Gordon Highlanders, and had taken part in the Boer War.  Previous to rejoining the colours fully sixteen months ago, he was employed as a batcher in Grove Mill.

Can you tell us more about Robert Sibbald'? Some additional facts, a small story handed down through the family or perhaps a picture or an heirloom you can share online. Contact our curator...